A catch-up with the Chairman 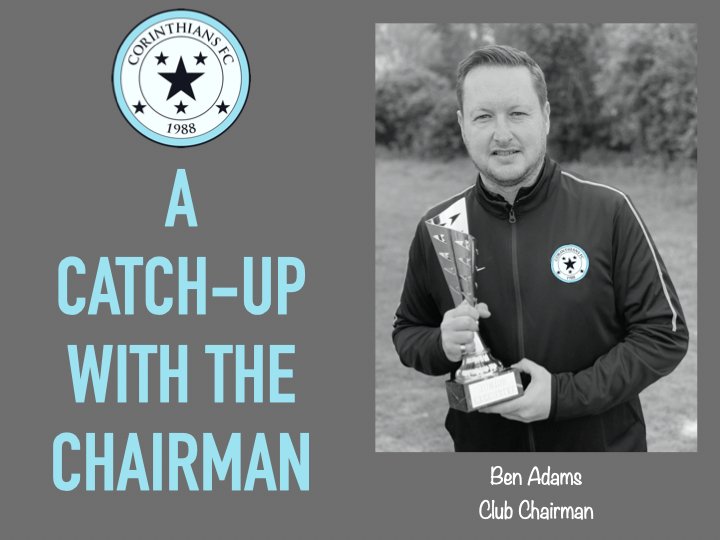 Corinthians' Club Chairman, Ben Adams, spoke to Club Media Officer, Daniel Mann about the upcoming season and what the future holds for Corinthians FC. Have a read below to see what he had to say.

Are you happy with how the club has started the season?

It was a tough summer and organisation was key , we got there in the end and all squads looked strong enough. The first team have started strong and fly the flag for us and with the support of a strong junior section and a very good Vets team.

I have tried to get to as many games as I can to support and from the football I have seen I’m very happy with the dedication and hard work.

How as a club are we preparing for the season ahead?

Pre season went quite well for most teams and we managed to get plenty of training in even though the group sizes were restricted.

I expect the first team to be right in the mix for promotion in the Essex Olympian league and I’m confident the vets first team can win the southend premier league.

The under 16 team although a little inconsistent look strong and I have high hopes for the future.

The brand new under 8 team were created through the summer and I really feel that they can be a cracking prospect for the club.

Overall I’m optimistic about the season.

Is there anything exciting happening in the near future?

Seeing a club grow is always exciting , we have great people here and we’re lucky.

There are lots of plans and lots of dreams and it would be fantastic to achieve them.

In the near future we have plans in place to start a ladies team and also increase the youth setup.

We would love to secure step seven status and have EJA teams at the club.

What things have you had to change due to COVID?

Covid brought real challenges for everyone but most people have been understanding and accepted the situation were in.

Most of the changes involved making the ground Covid secure for everyone.

I believe we did a great job there and although difficult to enforce we did have success.

We had pre season groups training in small numbers and all arriving at different times so that was a challenge , the startup of the under 8 team was also based at the club but also ran smoothly with no issues.

How does being a club chairman compare to being the role of a manager?

Being chairman of such a great club is easy really , there is lots to keep up with but it’s all rewarding in the end. Early Pitch inspections and late nights locking up are tough but I’ve enjoyed it all.

It’s massively different from managing and playing , in them roles you concentrate on the team and the benefits for them where as a chairman I have to think of all teams. I do miss pulling the shirt on and having that changing room buzz.

I would love to manage again in the future.